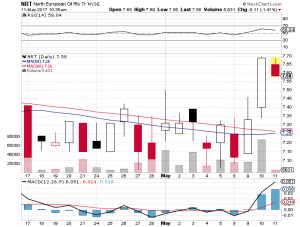 North European Oil Royalty Trust is a grantor trust. The company has market cap of $73.10 million. The Trust, on behalf of the owners, holds overriding royalty rights covering gas and oil production in certain concessions or leases in the Federal Republic of Germany. It has a 11.53 P/E ratio. The rights are held under contracts with local German exploration and development subsidiaries of ExxonMobil Corp. and the Royal Dutch/Shell Group of Companies (Royal Dutch/Shell Group).